Founded in 1877, Fort Huachuca is still an active military post. In its early days the fort played an active role in the settlement of southeast Arizona and the final capture of Geronimo in 1886. It is also known as the home of the Buffalo Soldiers, Negro troops of the 9th and 10th U.S. Cavalry. Two museums and an annex trace the colorful history of the fort.

Fort Huachuca continues to be important in military intelligence and the war on terror. Find more information about Fort Huachuca today here. 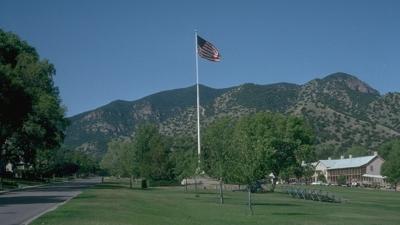 Fort Huachuca Museum and Annex
The museum re-creates the story of the U.S. Army in the Southwest, displaying uniforms of various periods, early equipment and weapons and model rooms, which present the daily life of the soldiers and their families. Admission is free, but a $2 donation is appreciated. There is a museum store. Boyd and Grierson Sts. The nearby U.S. Army Intelligence Museum presents the evolution of intelligence activities in the U.S. Army. (520) 533-7111

Because of the Fort’s active military status it is generally necessary to stop at the gate before entering to visit either the museum or the canyons. You will probably be asked to show two forms of picture ID including a driver’s license, as well as vehicle registration and proof of insurance.

B Troop, 4th U.S. Cavalry (Memorial)
B Troop commemorates the history of the U.S. Army’s participation in the Indian Wars in the Southwest. Established at Fort Huachuca, Arizona on July 4, 1973, B Troop dresses in authentic uniforms of the U.S. Army in the 1880s. The group participates in military ceremonies, parades, and mounted cavalry demonstrations across Arizona and the nation.

Garden Canyon Birding
This scenic area within Fort Huachuca contains some of the most diverse plant and animal life in the Huachuca mountains. A variety of wildflowers, birds, mammals and butterflies may be found here.

Garden Canyon Pictographs
A single-lane mountain road takes you to the top of Garden Canyon, where a short walk and a climb up “board-walk” steps lead the visitor to a good view of some prehistoric rock paintings. Although a chain-link fence protects them, there are framed openings to allow unobstructed viewing and photography of the paintings.