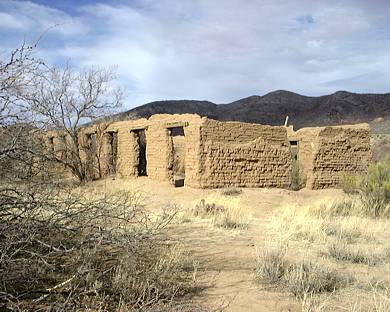 Courtland
Courtland was a copper mining camp on a short spur of the Arizona Eastern Railroad in the southeast corner of the Dragoon Mountains. The town was named for Courtland Young, one of the owners of the Great Western Mining Company, which had several mines there. Post Office established March 13,1909.10 mi. south of Pearce or west of Hwy 191 on Courtland Rd.

Gleeson
Indians mined turquoise deposits in the Gleeson area before the arrival of Europeans. A later turquoise mine was owned by Tiffany and Company. In AngIo-American times John Gleeson ran cattle here, although some copper mining was also done. Ruins and a cemetery mark the town. Post Office established October 15,1900. 5 mi. south of Courtland.

Russellville
Station of the Dragoon branch railroad in the Little Dragoon Mountains, 19 mi. northeast of Benson at exit 322.

Johnson
Johnson was a station and mining camp on the Dragoon branch railroad, on the east side of the Little Dragoon mountains. Headquarters of the Peabody Company in 1883, foundations can be traced, north and west of Russellville. Post Office established April 5,1900. 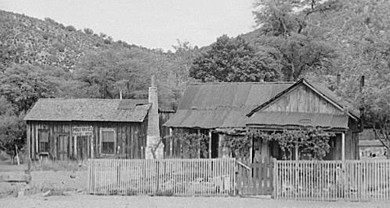 Paradise
Paradise was an 1890s mining town in the Chiricahua Mountains, 6 mi. NW of Portal. Post Office established October 23, 1901. Above is the Paradise Post Office of 1937 (In many cases the post office was at the home of the current Postmaster.)

Galeyville
Begun as a mining camp, Galeyville is a few miles north of Paradise. Since the area was almost inaccessible from the Tombstone side, it became a favored resort of rustlers and smugglers from both sides of the border. It was known as the hangout of Curley Bill Brocius and his gang. Post Office established January 5, 1881.

Pearce
Pearce was the site of one of the richest gold strikes ever found in Arizona, said to have produced between fifteen and thirty million dollars worth of gold from 1894 to 1896. Pearce was also the headquarters of the Alvord/Stiles gang who robbed the Southern Pacific Railway train at the Cochise Station September 9, 1899. Mining camp with original store and post office, south of Sunsites, off Hwy 191 Post Office established March 6,1896. Railroad station opened 1903.

Middlemarch
This mining camp in the middle pass of the Dragoon Mountains is about 6 mi. SW of Pearce. It was the site of the Middlemarch Copper Company, which operated there for some years. Post Office established May 10, 1898. Rock walls, debris and dump.

The Brunckow Cabin
Ed Schieffelin was not the first to find silver in the Tombstone Hills. Frederick Brunckow, a Prussian-born mining engineer, began work on the San Pedro mine and erected a cabin near the San Pedro River. The remains of that adobe cabin can still be seen between Charleston and Tombstone. In 1860 Brunckow was working the mine with three other men and about a dozen Mexican helpers. He and two of his men were robbed and murdered at the cabin. The Mexican workers were blamed for the killings. Brunckow’s San Pedro mine influenced Ed Schieffelin in his prospecting during 1877 of the outcrops to the northeast. It is said that he used the fireplace in the Brunckow cabin to assay some of his samples after he made the discovery that made Tombstone famous.

Contention City
Contention City was a Post Office and milling town on the San Pedro River. The town was established in 1879 and served as the site of a milling operation for Tombstone’s silver mines. It was also a station on the El Paso and Southwestern Railroad. The town was named after the Contention Mine, which had been the source of a dispute between Dick Gird and his partners. Post Office established April 6,1880.5 mi. north of Fairbank along the San Pedro River.

Fairbank
Fairbank was a railroad station along the San Pedro River, established in 1882 on the El Paso and Southwestern line. It was the closest railroad connection to Tombstone, and remained active through the 1930s. Buildings still standing at the site include the Adobe Commercial Building, which consisted of a general store, post office and saloon, a small house, built in 1885, and a Schoolhouse built of gypsum block in 1920. The stable and outhouses date to a WPA project that operated out of Fairbank during the depression era. Post Office established May 13,1883. Visitors can hike 1.5 easy miles north to the masonry ruins of the Grand Central Mill.

Charleston
Said to have been tougher than Tombstone in its heyday, little is left of Charleston today. However, there are some remains to be seen of its “sister city,” MilIville, on the east side of the San Pedro River. Charleston Post Office established April 17,1879. (Parking area off Charleston Road. Townsite is to the north of the highway) A marker in the parking lot commemorates the “Battle of the Bulls” of the Mormon Batallion. A group of Mormons enrolled in the U.S. Army at the time of the Mexican-American War. Passing through southern Arizona in December, 1846, they encountered herds of cattle which had run wild after Mexican settlers abandoned their ranches in the face of Apache opposition. Large numbers of uncastrated bulls made travel along the San Pedro hazardous to the unwary. The Mormons of General Cooke’s command escaped serious injury during the bull attack, but several of their mules were not so lucky.

Reef Townsite
The Reef townsite was a mining camp active from the 1880s to the early 1900s when miners sought silver, gold and tungsten there. The town took its name from nearby Carr Reef, a band of quartzite cliffs running along the eastern side of the Huachuca mountains. After you make the white-knuckle ride up the one-lane many-switchbacked road, you reach two relatively large level areas, Reef Townsite campground and Ramsey Vista campground. A short hiking trail around the Reef campground guides a visitor among old mining digs, a primitive water system, and the foundations of an ore mill. The elevation is 7200 feet. In the fall the drive up Carr Canyon can lead you to a view of the beautiful splashes of bright yellow formed by the forest of aspens high up the mountain. Some of the tent sites at the Reef campground are located on the foundations of the “town’s” original dwellings. Access may be restricted when fire danger is high. There is a $10 charge for overnight or day use. The day-use group picnic site can be reserved by calling the Sierra Vista District Office, (520) 378-0311. Season: spring, summer, fall

Garces
Garces was a hamlet in the Huachuca Mountains, named after Garces National Forest, now called Coronado National Forest. Previously the town had been called Reef or Palmerlee. Few remains can be seen. 10 mi. south of Sierra Vista.

Hamburg
At the turn of the century Hamburg was a mining community of some 150 people in Ramsey Canyon. Today there are no traceable remains. “Many years ago an old German, Henry Hamburg, had a mine here called the Hamburg Mine. Locally the mines were called the Stromberg and Hamburg group of copper mines,” according to an early resident. Post Office established October 5, 1906.

Butterfield Stage Station, Cochise Stronghold
Traveling through Arizona prior to the Civil War, the Butterfield Overland Stage went from spring to spring, driven by the constant need for water by horses, mules and men. One of these springs, in Dragoon, was also the burying place of the only Confederate soldiers known to have been killed in battle within the boundaries of modern-day Arizona. A plaque marks the springs and the graves and tells the story of the men buried there. From Dragoon take Four Canyon Road (Forest Road 687) south four miles then follow the signs to Jordan Canyon.

Mowry Mine, originally Patagonia Mine
In 1860 Sylvester Mowry purchased the Patagonia Mine and renamed it the Mowry Mine. A Confederate sympathizer, Mowry was arrested by General James H. Carleton, and his mine was confiscated by the Union. After his release Mowry entered a lawsuit for $1,129,000 for alleged illegal seizure of the mine even though the confiscation had been authorized by a federal court. Mowry had not collected anything by the time of his death in 1871.

Sagstetter, Beth and Bill. The Mining Camps Speak: A New Way to Explore the Ghost Towns of the American West