“The mountains and the sun…were made his allies, the eyes of his command, and the carriers of swift messages. By a system of heliograph signals, communications were sent with almost incredible swiftness; in one instance a message traveled seven hundred miles in four hours. The messages, flashed by mirrors from peak to peak of the mountains, disheartened the Indians as they crept stealthily or rode swiftly through the valleys, assuring them that all their arts and craft had not availed to conceal their trails, that troops were pursuing them and others awaiting them. The telescopes of the Signal Corps, who garrisoned the rudely built but impregnable works on the mountains, permitted no movement by day, no cloud of dust even in the valleys below to escape attention. Little wonder that the Indians thought that the powers of the unseen world were confederated against them.”
So wrote Major George W. Baird as he described Miles’s tactics against Geronimo in Century magazine, July, 1891.

The heliograph is a device for communicating over distances using light from the sun reflected in mirrors to flash signals in Morse code or some other agreed upon messaging system. 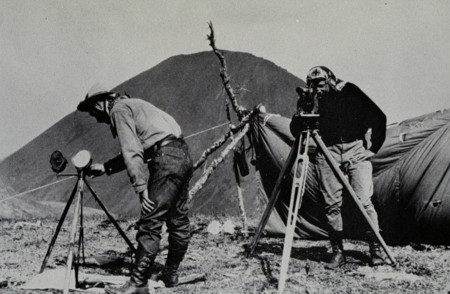 The photo above shows the heliograph being used in 1910 as part of the work of the Alaska/Canada International Boundary Commission. It is from the NOAA photo library–Image ID: theb1633, Historic C&GS Collection, Location: Alaska – Canada Boundary, Photo Date: 1910, Signaling with heliograph near Monument 92. Alaska – Canada border. International Boundary Commission

Heliographic communication was used in Arizona during the summer of 1886 by General Nelson Miles in his pursuit of Geronimo.

We are lucky to have a first-hand account of the use of the heliograph by C.F. von Herrmann, the first heliograph operator stationed at Fort Huachuca. Here are some excerpts from his account:*

I received telegraphic instructions to report at once for duty to General Miles at Fort Huachuca, Ariz. for duty against the Apache Indians which had gone on the war path in southern Arizona and northern Mexico. This was Geronimo and his band.

When I arrived at Fort Huachuca my previous military experience was again serviceable. For on reporting to the adjutant he started to say I will assign you to troop so-and-so, but I spoke up quickly and said that the men of the Signal Corps on duty outside of Washington did not participate with the troops but would take care of themselves, as he could judge by the fact that I wore no uniform. “All right,” he said, “there is a hotel,” and promptly forgot all about it. So I took quarters at the hotel and there I found also all the young unmarried lieutenants and other officers, and as they did not know me I was not disturbed, and remained at the hotel for some time until I found more reasonably priced lodging and board with a married commissary sergeant. I was the only man apparently who had so far been ordered to Huachuca for heliograph duty, … By the time the new men arrived, I had already completed a permanent heliograph station on a pretty high hill close to Huachuca. This station used a large round heliograph mirror which tipped backward and forward slightly by means of a key at the back, making a click just like a telegraph sounder. No screen was required as the flash of light was simply lifted far above and dropped down to the station to make the dots and dashes. I had had a very firm stand or table made with heavy posts let into the ground, and the outfit worked wonderfully well. …

Here there occurred an illustration of the effect of the clearness of the atmosphere in the west, which was well known to me. The young fellows from Ft. Myer [Va] had none of them ever been west. When they first visited my heliograph station I pointed out to them a town in which the houses could be very clearly seen. I asked the boys how far away they thought it was. One spoke up and said, “You can’t fool us on that proposition. We have heard all about the deceptiveness of distances in this country, and so although that place looks to me to be about 2 miles distant, I’ll say it is 5 miles.” With this the others mostly agreed and were astonished when they found the place was 25 miles away.

When I reported to General Miles the morning after my arrival, he informed me that the plan was to establish signal stations on prominent peaks for the purpose of watching the country thoroughly by telescopes and transmitting intelligence of the movements of troops and of hostile Indians by the heliograph which would be the instrument chiefly used. I was able to inform General Miles that I had had considerable success in the use of the heliograph while at the school of instruction at Fort Myer, Va. and that I could instruct men in the use of the instrument. Classes for instruction were at once assigned to me. We practiced across the parade ground and the officers, I could see, had but little belief that the instrument could be of any service.

As the altitude of Huachuca is very considerable, the sun was very powerful, and being obliged to be in bright sunlight practically from sunrise to sun set, my face burned terribly and the skin peeled off not once but continually, as I unfortunately do not burn brown but rather burn up. Finally the adjutant of the post took compassion on me, and gave me an oddly made shade. It had a strong wire frame which was secured around the body, and above it an umbrella like structure covered with white canvas, which could be folded over the back when not in use. I wore this all the time and it was certainly a comfort, but it was conspicuous and I became a notorious character.

During May, 1886, before there were any other heliograph stations established excepting the one at Huachuca, I made my big flash move continually around the country trying to stir up something, and especially I directed it on every little collection of houses that I could see through the telescope, so that the natives were generally more or less wonderstruck. At last one day I got an answering flash very faint from a party in the field, and after careful adjustment took a message to the commanding office requesting the immediate dispatch of forage and other supplies to a place some fifty miles away. When I delivered this telegram to the Commanding office, the fact became known shortly and a crowd of officers came up to the heliograph station to see it work. The supplies were sent at once. I have seen the heliograph flash as far away as Ft. Bowie, 90 miles distant.

Huachuca was station No. 7, and communicated west with Mt. Baldy, about 40 miles, on which my friend Neifert was in charge. The heliograph line ultimately attained a length of over 200 miles from Mt. Baldy, to stations in New Mexico, and undoubtedly aided the troops in capturing Geronimo and his men who were frightened by the flashes of light which appeared everywhere. But this story has no doubt been fully told in public reports.

The time I spent at Ft. Huachuca was very pleasant. The work was interesting, the climate was fine, and the skies so clear at night, that having an excellent book on astronomy with me with some good charts of the constellations, I spent a good part of every night in studying the heavens and learned much about the “friendly stars.”

The heliograph stations were discontinued in September, 1886, and I was ordered to take charge of the station at LaCrosse, Wis. I got on the train at Huachuca station with a straw hat and linen duster, and as the country was uninteresting and besides familiar to me, I hardly left the car, reading novels most of the time until I reached Omaha. Here I got off the train and for a moment was surprised to have everybody at the depot staring at me, until I began to feel that it was very cold, and presently saw a cold wave flag flying and found that the temperature was 3 degrees below zero. I bought an overcoat, quick.

*from A National Weather Service Publication In Support of The Celebration of American Weather Services…Past, Present and Future on the NOAA website, http://www.nws.noaa.gov/pa/history/herrmann.php
The complete document by Herrmann can be found at the above web address.

If you are interested in learning more about the heliograph you should check out James Riddle’s site, Heliography, (Communicating with Mirrors) by James Riddle – KD7AOI The web address is http://myweb.cableone.net/kd7aoi/

The Southwest Museum of Engineering, Communications and Computation in Glendale, Arizona has devoted a page on its website to the heliograph. There you can view pages from the Manual of Instruction in Army Signaling, 1886, and other heliograph memorabilia.