Silver in the Tombstone Hills 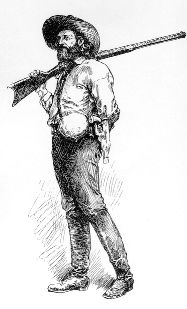 In 1877, about the same time that Captain Whitside was sent to southeast Arizona to locate a site for a military camp, which turned out to be Camp (later Fort) Huachuca, a German from Pennsylvania was prospecting in northern Arizona.

While prospecting up in the Walaipai country, Ed Schieffelin heard that a group of Walaipai Indians had enlisted as scouts to serve at the new Camp Huachuca. Ed tagged along, thinking it was a good opportunity for prospecting. He arrived in Camp Huachuca about the beginning of April. After a few forays with the scouts, Ed decided to remain in the hills east of the San Pedro River on his own. Despite the soldiers’ gloomy predictions that he would find nothing but his tombstone, Ed held out, prospecting with his pick in one hand and his Sharps rifle in the other, his mule as alert to danger as the best watchdog.

Ed knew he was on to something but was unable to find backers for his mine–and he was dead broke himself. He took a trip to Tucson to show his pieces of ore around, but no one was interested. Finally, Ed traveled back to northern Arizona where his brother Al was working with Richard Gird. Gird, an assayer, liked Ed’s samples, and the three set out together to find the silver in the Tombstone Hills. They had soon staked out the Lucky Cuss and the Toughnut mines.

As soon as these discoveries were known, a rush began and Tombstone became a boom town. But it takes substantial capital to develop a silver mine, and Ed was more interested in prospecting than in becoming a city businessman. He packed up and went out prospecting for four months. When he got back he found that Al had a buyer for their claims in the mines. Al and Ed sold out for $600,000 each. Richard Gird took his payment in company stock and eventually made considerably more profit. A conservative estimate of the Tombstone mines’ production is about $40 million in 1870s dollars with an approximate modern value of $1.7 billion.

The Town of Tombstone
The town of Tombstone was laid out in 1879 about a mile from the first Schieffelin camp. At its peak the population probably reached 8,000 although some estimates claimed twice that number. Like any mining town it attracted its share of drifters, dancehall girls, saloonkeepers and gamblers.

There was also a dangerous group of backcountry toughs called “cow-boys,” who lived by stealing cattle and robbing stagecoaches. (In Cochise County in the 1880s it was an insult to call a man a “cow-boy.” You were calling him a horse thief, a robber and an outlaw. Legitimate cattlemen were generally called herders or ranchers.)

Although the crime wave of the 1880s is associated with Tombstone because of the famous gunfight at the OK Corral, most of the serious crimes were in fact committed outside the town along the smuggling route through Skeleton Canyon or on the dark and lonely roads linking Benson, Contention City, Charleston and Tombstone. Charleston, a silver-milling town along the San Pedro River, was generally thought to be a tougher place than Tombstone.

Formation of Cochise County
As the eastern area of huge Pima County became more populous, the citizens began campaigning to have their own county, to avoid having to make the long trip to Tucson to conduct their business. In 1881 Cochise County was split off from Pima with the new county seat established at Tombstone.

John Behan was appointed as the first sheriff of Cochise County, serving in 1881-2. Not a strong sheriff, he was considered too friendly with the “cow-boy” element and was not completely trusted by Wyatt Earp, Bat Masterson and other lawmen. Sometimes prisoners “escaped” from Behan’s care. In 1882 an investigation was begun into irregularities during his term of office. Facing a grand jury, Behan left the county. In 1887 he was employed as a guard at the Yuma prison.

In the 1880s, iIlegal traffic flourished along the U.S./Mexico border with American “cow-boys” bringing stolen Mexican cattle north while Mexican smugglers came north for alcohol and tobacco. The Mexican government taxed these items so heavily that a handsome profit could be made by smuggling them across the border. Some Arizona outlaws made a practice of waylaying the Mexicans on their way north, when they were carrying gold, coins and bullion to Tombstone or Tucson to make their purchases. The robberies were seldom reported since the victims were themselves operating outside the law. Sometimes the victims did not even survive to tell the story. In one famous encounter in Skeleton Canyon in the far southeast corner of Arizona, fifteen Mexicans were reportedly held up and killed by the Curley Bill Brocius gang, with their bodies left for the coyotes and buzzards. At the San Bernardino ranch there were soap dishes supposedly made from skulls found in Skeleton Canyon. As late as 1921 stories were circulating of silver bars and gold coins being found in the canyon, scattered, perhaps, by fleeing pack mules.

Among those allegedly involved in this clandestine importation of livestock from Sonora were the marginally respectable Clanton and McLaury clans. Many early Tombstone residents were willing to look the other way–when it was “only Mexicans” being robbed. The illegal cattle dealing kept meat prices down and furnished cheap stock for small ranchers struggling to get by. When the outlaws began to strike north of the border, Arizonans of Mexican ancestry were often targeted first. Jose M. Elias, whose family was prominent in Spanish colonial times, owned a large ranch on the San Pedro river. His valuable horse and mule herds were plundered again and again. In 1880 some “cow-boys” even took on the U.S. Army. A party searching for six government mules found them at the McLaury ranch, where the thieves were trying to change the brand from ‘U.S.’ to ‘ D.8.’

The antagonism between the Earps and the Clanton and McLaury faction erupted into violence in the legendary gunfight of October 26, 1881, which left Tom McLaury, Frank McLaury and Billy Clanton dead and Virgil Earp wounded.

After an inconclusive coroner’s inquest, Ike Clanton (who had scampered off during the shootout) filed first-degree murder charges against the Earps and Holliday. Clanton and his lawyers, who included Will McLaury, brother of the slain men, endeavored to prove murder with malice aforethought against all four gunmen. The matter came before Judge Wells Spicer in a hearing that lasted a month and ultimately found the defendants not guilty. Northwestern University law professor Steven Lubet has published a blow-by-blow account of this hearing and concludes that Ike Clanton and Will McLaury harmed their own case by aiming for full revenge–hanging all four men. According to Lubet, a more temperate prosecution may have resulted in conviction for involuntary manslaughter or at least “a censurable act” in which the lawmen acted “incautiously and without due circumspection.” The detailed account of the court proceedings and analysis of the legal expertise of Earp defending counsel Thomas Fitch make for fascinating reading. See Murder in Tombstone: The Forgotten Trial of Wyatt Earp by Steven Lubet.

Aftermath of a Gunfight
The famous gunfight did not end the violence. Ike Clanton, who had precipitated the conflict, emerged unscathed. He went back to the ranch and began reconstructing his crew. After a few weeks, talk was circulating of a “hit list” of names targeted for reprisals. Among those rumored to be on the list were Virgil, Morgan and Wyatt Earp, of course, along with Tom Fitch, Wyatt’s attorney, Doc Holliday, Judge Spicer, who had conducted the hearing which exonerated the Earps, and John Clum, the mayor of Tombstone and owner of the Tombstone Epitaph newspaper. Two months after the gunfight, U.S. Marshall Virgil Earp was ambushed in the dark and shot. He lived but lost the use of his left arm.

On learning of Virgil’s injury U.S. Marshall Crawley Dake appointed Wyatt Deputy U.S. Marshall with the authority to select his own deputies. Wyatt now had federal authority behind him and it was not long before he found an opportunity to exercise it. In January, 1882 the stage from Benson to Tombstone was stopped twice. One robbery yielded $6500 in Wells Fargo cash and in the other eight passengers were robbed of $1500. A San Francisco newspaper commented wryly that Tombstone residents were likely to be shot on the streets if they stayed in town, and robbed on the stagecoach if they attempted to leave. Stage robberies indeed had become a common occurrence.

In March, 1882, Morgan Earp was shot while playing pool in Campbell & Hatch’s Billiard Parlor. He lived long enough to tell his brothers who he thought had shot him. A coroner’s jury ruled that the likely perpetrators were Frank Stilwell, a Clanton buddy, Pete Spence, and a man known as “Indian Charlie.” These were all names that Wyatt recognized.

On March 20 the Earps caught the train at Benson to take their brother’s body home to Colton, California, where their parents lived. Wyatt, his brother Warren, and Doc Holliday stepped off the train in Tucson. Shots were fired. The Earps and Holliday jumped back abroad the train as it started. Frank Stilwell’s body was found in the railroad yards the next morning.

George Hand of Tucson recorded these events in his journal*
“Mar. 19. Morgan Earp died today from a gunshot wound he received while playing billiards in Tombstone. He was shot through a window from the sidewalk.

In spite of the warrant out for their arrest, Wyatt and Doc returned to Tombstone one last time. When they left, they were pursued by a posse including such upright characters as Curley Bill Brocius, John Ringo, and Phin Clanton. The remaining Earp brothers soon left the Arizona Territory for Colorado, and Tombstone returned to business as usual.

The boom in Tombstone lasted less than ten years. The first water strike was hailed as a benefit by the citizens. Now they could bathe more frequently, and they had a weapon against the fires which had so often beleaguered the city. But they shortly learned the truth of the old mining adage, “When the water runs in, the profits run out.” Giant pumps were installed, but water continued to seep into the mines. After a fire burned the pumps of the Grand Central Company in 1886, water claimed the mines for good and the town lost its boom-town status. It did, however, remain the Cochise County seat until 1929. So it still saw a little excitement from time to time.

Tombstone in 1882 by William Henry Bishop