In 1858 John Butterfield of Utica, N.Y. won a government contract of $600,000 a year for six years to carry mail from St Louis to San Francisco twice a week. Butterfield spent more than a million dollars getting the company started. He ran between 100 and 250 coaches, 1000 horses, 500 mules and had about 800 employees. The large, high quality coaches were manufactured in Concord, New Hampshire, weighed about 2,500 pounds and cost $1,300 at that time.
The Butterfield Overland Mail Company initially followed a southern route between St. Louis and San Francisco that skirted the Rocky Mountains and avoided the heavy winter mountain snows by traveling through Texas, southern New Mexico Territory and southern California. The trip, about 2,800 miles, was made in twenty-five days and sometimes less. Lack of water and hostile Indians plagued the route throughout its existence.

Though the coaches had the mail as their first priority they also accepted as passengers any hardy souls who were game for the adventure. Passage for the whole route cost $200, and a passenger was allowed twenty-five pounds of baggage, two blankets and a canteen. The coaches traveled at breakneck speed twenty-four hours a day; there were no stops for bed and breakfast–only the hurried intervals at the station houses when they changed horses. Travelers were then offered meals of bread, coffee, cured meat and, on occasion, beans. Mark Twain described the beverage he was offered by one station keeper, who called it slumgullion: “It purported to be tea, but there was too much dish-rag, and sand, and old bacon-rind in it to deceive the intelligent traveler. He had no sugar and no milk–nor even a spoon to stir the ingredients with.” (Mark Twain described travel in 1861 on the overland stage in Roughing It. Read an excerpt.)

Coaches passed through southeast Arizona twice a week on Sundays and Wednesdays. The route through southeastern Arizona from 1858 to 1861 crossed into what is now Arizona from Mesilla, New Mexico Territory at Stein’s Pass, then headed west/southwest to San Simon, through Apache Pass, Ewell Springs, and Dragoon Springs (about twenty miles north of Tombstone). It crossed the San Pedro River just north of the present Benson and then veered slightly north to pass Cienega and head up to Tucson and on to San Francisco via Yuma and Los Angeles. The ruins of the Butterfield Station at Apache Pass are part of the Fort Bowie National Historic Sitenear Willcox. James Tevis, an employee who helped build the Apache Pass station house describes it as follows: “A stone corral was built with portholes in every stall. Inside, on the southwest corner, were built, in L shape, the kitchen and sleeping rooms. At the west end, on the inside of the carral, space about ten feet wide was apportioned for grain room and storeroom, and here were kept the firearms and ammunition.” [Tevis, Arizona in the ’50s, p. 94] 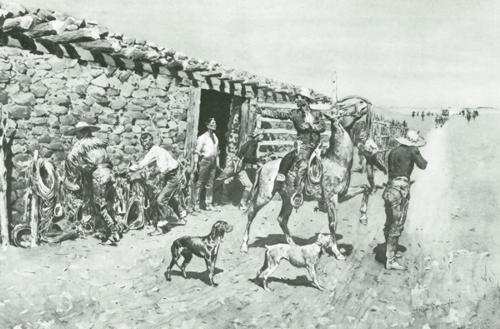 An Overland Station: Indians Coming in with the Stage, by Frederic Remington

The Butterfield Stage terminated operations along the southern route at the outbreak of the Civil War. When Texas seceded from the Union early in 1861, the Overland Mail abandoned the Southwest. Officials in Washington rewrote the mail contract so that stages would travel through Nebraska and Utah. This was a devastating blow to the settlers in the New Mexico Territory, which included all of present-day Arizona. The change was immediately obvious to the Apaches who must have watched from the mountains as the wagons, horses and mules were gathered up in an ever-growing caravan heading for California. The ominous parade included more than 200 horses, wagons, supplies, and twenty-one stagecoaches, empty except for the driver. The Overland Mail was moving out “lock, stock, and barrel.”

Some months before reporter Thompson Turner predicted that the removal of the Overland route would be a “death blow to Arizona.”

The prospect of a withdrawal of the Overland Mail from this route has caused a complete stagnation in business and enterprise. “What will we do? Where shall we go?” is in every man’s mouth. … Private letters from Washington state that it is even in contemplation by the new Administration to withdraw the troops from this country. If this should be done, we are ruined and Arizona will lapse into nothingness.**

The old Butterfield Road was later used by both the Confederate and the Union armies. During the Civil War Arizona territory was virtually cut off from adequate communication with the outside world.

J. Ross Browne described the lack of communications in the territory as follows:

We soon had the pleasure of meeting the wagon and escort, by which we anxiously expected food both for body and mind. Only those who have been, as we were, nearly two months without a word of news from home, can appreciate the eagerness with which we crowded around the Sergeant and asked for the letters and newspapers; and only such can appreciate our disappointment, when we found that we had neither news nor newspapers of a later date than that of our departure from Tucson. Private letters there were for some of our party, but nothing that threw the least light upon the progress of the war. For all the information we had, we might as well have been in Timbuctoo or China. I could not but marvel that there existed within the limits of the United States a spot so completely isolated from the civilized world. Military expresses are all that now serve the purposes of communication in Arizona. So far as they go they are a great convenience; but it is hard for private citizens engaged in business to be dependent upon such precarious means of intercourse with the outside world. At this moment Arizona is, practically, more distant from San Francisco and New York than either of those cities is from China or Norway. I made the trip from Germany to Iceland and back much more easily, and with much less expense and loss of time, than from San Francisco to Sonora and back. Now that the Governor and his staff have located the capital, and put the wheels of the Territorial Government in operation, it is to be hoped that this great desideratum will attract the attention of Congress. Without mails and newspapers Arizona will never be a thriving country. (J. Ross Browne, Adventures in the Apache Country, Chapter XXV)

The next public mail to reach Tucson came from California on horseback September 1, 1865. The first through mail from the east arrived August 25, 1866, but it was not until the coming of the miners and the railroads in the 1870s and 1880s that regular contact with the States was restored.

To go to the Fort Bowie National Historic Site:
From Willcox drive southeast for 20 miles on State #186 to the Fort Bowie turn off, then drive another eight miles on the unpaved Apache Pass Road to the Fort Bowie Trailhead and parking lot. There is a walk of three miles round trip to the ruins and back to your car. Handicap access is available if you call in advance and make the necessary arrangements. There is no camping at the site.
From the town of Bowie, the trailhead is located on Apache Pass Road, 13 miles south. Fort Bowie National Historic Site is open year round 8:00 am to 5:00 pm daily except Christmas Day.

Mark Twain described travel in 1861 on the overland stage in Roughing It. Read an excerpt. Adventures in the Apache Country will soon be available as a free e-book.