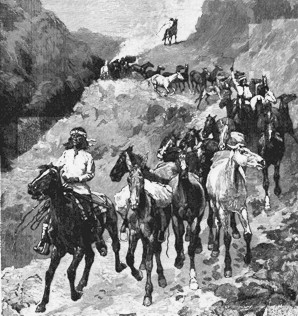 The illustration above shows Geronimo and his band returning from Mexico through Skeleton Canyon with a herd of horses stolen from ranchers in Mexico.
Frederic Remington, published in Harper’s Weekly, August 18, 1888

In Pursuit of Geronimo

Following his surrender in 1883, Geronimo and his band had agreed to live on the San Carlos Reservation. In May 1885, however, a band of Apaches, led by Geronimo, Nana and Nachez, left the San Carlos reservation and fled to the Sierra Madre Mountains of Old Mexico where they resumed their former life of raiding Mexican towns and ranches.

From Fort Bowie and Fort Huachuca, General George Crook pursued the Indians for ten months. At one point, Geronimo agreed to surrender, but, on the night before, changed his mind and took off again across the border, leaving the embarrassed General Crook to explain the fiasco to his superiors. For a first-hand account of a grueling campaign into Mexico in 1885-86, see Lieutenant Marion Maus’ report of A Campaign against the Apaches and the correspondence between General Crook and Lieut.-Gen. P.H. Sheridan in Washington that ultimately resulted in Crook being replaced by General Miles: 1886 Official Correspondence regarding Geronimo’s band.

Enter General Nelson Miles
The commanding general, Philip Sheridan, had never supported Crook’s use of Apaches as scouts and disagreed with Crook’s tendency to negotiate with the hostiles on their own terms. Sheridan, then, was highly displeased to hear that on March 29, 1886, Crook had left his charges before they had reached Fort Bowie, allowing them to escape during the night.

Reacting to Sheridan’s acute displeasure, Crook impetuously asked to be relieved of his command. He was swiftly replaced by the ambitious General Nelson A. Miles who accepted command of the Department of Arizona on April 2, 1886.

Two tasks confronted him; to capture and destroy the Indians who were actively hostile led by Geronimo and Natchez, and to repress and control those who, through sympathy and relationship with the hostiles, and through instinct and experience were ready to take the warpath and swell the tide of devastation. The mountains and the sun–the first the strongholds of the savages and almost impassable obstacles to the troops, the latter the cause of the desert-like dryness and the intolerable heat which augmented the difficulties of campaigning almost to the point of impossibility–were made his allies, the eyes of his command, and the carriers of swift messages. By a system of heliograph signals, communications were sent with almost incredible swiftness; in one instance a message traveled seven hundred miles in four hours. The messages, flashed by mirrors from peak to peak of the mountains, disheartened the Indians as they crept stealthily or rode swiftly through the valleys, assuring them that all their arts and craft had not availed to conceal their trails, that troops were pursuing them and others awaiting them. The telescopes of the Signal Corps, who garrisoned the rudely built but impregnable works on the mountains, permitted no movement by day, no cloud of dust even in the valleys below to escape attention. Little wonder that the Indians thought that the powers of the unseen world were confederated against them.

…General Miles organized a special force of picked cavalry and infantry, scouts and guides under Capton H.W. Lawton, 4th Cavalry, to pursue the hostiles whenever they should take to Mexican territory.

These tactics were continued throughout the brutal summer of 1886 with scarce water, little grass and heat often reaching 120 degrees. At last the worn out Indians surrendered on September 4th. General Miles described Geronimo as he was at the time of surrender:

Soon after my reaching Lawton’s command, Geronimo rode into our camp and dismounted. He was one of the brightest, most resolute, determined looking men that I have ever encountered. He had the clearest, sharpest, dark eye I think I have ever seen, unless it was that of General Sherman when he was at the prime of life and just at the close of the great war [the War between the States]. Every movement indicated power, energy and determination. In everything he did he had a purpose. Of course after being hunted over these desolate valleys, mountain crests and dark ravines until he was worn down, he was anxious to make the best terms possible. His greatest anxiety seemed to be to know whether we would treat him fairly and without treachery, or, as soon as he and his followers were in our hands, order them shot to death, as had been the fate of some of his people. He first wanted to surrender as they had been accustomed to surrender before, by going back to Apache and taking their property, arms, stolen stock, and everything with them. I replied to this proposal that I was there to confirm what Captain Lawton had told them, and that was that they must surrender absolutely as prisoners of war. They could not go back to Fort Apache as they had done on previous occasions.

The final surrender of Geronimo took place at Skeleton Canyon (near Douglas) in September 1886. From there he was escorted to Fort Bowie and later removed to Florida. He lived until 1909, becoming a public figure and national celebrity in his old age.

Excerpts from Recollection of Geronimo’s Final Surrender
Another point of view
As told to Fred W. Croxen, Sr., by William Loy and John Hand.

With the Army were Indian scouts under command of Lieut. Charles B. Gatewood. One of these old scouts, known as Sgt. Smiley, who later lived on the Yavapai-Apache Indian Reservation in the Verde Valley, told this story to William Loy (now deceased), a white man whose ranch adjoined the reservation.

Fred Coxen: “William Loy, very reliable man, told me this story as the old Indian scout had given it to him:

William Loy: “The Indian scouts were near Geronimo’s band, in the Sierra Madre Mountains of Mexico. Lieut. Gatewood gave permission to Sgt. Smiley and another Indian scout, both of whom knew Geronimo personally, to make contact with the renegades, which they did. They went into Geronimo’s camp and talked all night with him and his band.

“Sgt. Smiley said that they advised the band to surrender to General Miles or they would all be killed by the American civilians, and those would include rancheros, miners, freighters, mail contractors, along with others.

“Sgt. Smiley stated he had advised Geronimo that while he and his band might out-travel or elude the Army, whose slow travel and loud bugle calls handicapped them, it would be different with the civilians who were determined to get him and his band, and would surely do it because their methods were very different.

“Geronimo and his band talked it over, and because of the all-night meeting with the two courageous scouts and a long powwow with Lieutenant Gatewood, decided to surrender at a place designated as Skeleton Canyon in the Peloncilla [sic] Mountains. This place was near the Arizona-New Mexico line, but in Arizona.”

That concludes the brief account given by William Loy of the Geronimo surrender negotiations.

In 1934 the CWA and the city of Douglas built a stone monument near the site where Geronimo surrendered to General Nelson A. Miles in September 1886. It’s about 35 miles northeast of Douglas and near Highway 80, which was the main road in southeast Arizona before the building of Interstate Highway 10. (Pictures of Geronimo and some of his group were originally inlaid under glass in the sides of the monument. Supposedly these were removed by vandals, but it’s possible that they were destroyed by descendants of the settlers who had suffered at the hands of Geronimo’s band or other Apaches from 1850s through the 1880s.)

One of the Indians arrested after the Geronimo war and sent east by railroad was Massai, a Chiricahua Apache. Massai escaped from the train and traveled back west. This journey took him more than a year, during which time he avoided all human contact with either whites or Indians. Massai’s predations became legendary in New Mexico and Arizona where he was sought for years but never re-captured. In “Massai’s Crooked Trail” Frederic Remington tells the story of Massai as he heard it from the chief of scouts.