New! The Horses of the Plains

Most of the evolutionary development of the horse (54 million years ago to about 10,000 years ago) actually took place in North America, where they developed the very successful strategy of grazing (eating grass) rather than browsing (eating softer succulent leaves). These grazers had evolved specialized teeth for processing the stiff and coarse grass that was at that time becoming very plentiful on the Great Plains of North America. The sketch below, from Prehistoric Mammalsby Jan Sovak, is the artist’s visualization of Pliohippus, the first primitive horse that had a single toe and hoof on each leg, like our modern horses. These small horses lived in North America some 6 million years ago, when they might have been preyed upon by Borophagus, the large, hyena-like dog shown in the sketch. 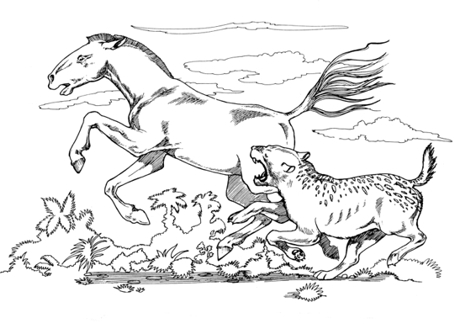 Horses (Equus)continued to evolve and develop for another six million years after Pliohippus and became very successful, spreading throughout North America. At some point some of them crossed into the Old World via the Arctic-Asia land bridge. Then, suddenly, no one is absolutely certain why, between 10,000 and 8,000 years ago, Equus disappeared from North and South America. Various theories have been advanced including destruction by drought, disease, or extinction as a result of hunting by growing human populations. At any rate, the horse was gone from the western hemiphere. The submergence of the Bering land bridge prevented any return migration from the Old World or Asia, and the horse was not seen again on its native continent until the Spanish explorers brought horses by ship in the sixteenth century.

The drawing above (from Cowboys of the Old West) pictures one of the first New World cowboys, a descendant of the stockmen who joined Columbus on his second voyage, bringing their horses and cattle that would later be taken by Cortes to Mexico, whence they spread across the continent. These early horsemen that came from Spain brought both Spanish and Moorish traditions, including the jineta-style saddle shown above. Before the invention of the lariat a three-pointed lance was used to drive the cattle.

Frank Secoy in his ground-breaking study* noted that two items of European culture altered forever the intertribal warfare of the Indians: the horse and the gun. Because Spanish policy forbid the selling or giving of firearms to the Indians–and because few Mexicans possessed guns–the two items came from different directions.

The horse came from the Spanish in the south and west, and the gun came from the French and English, and later the Americans, in the north and east. Whichever tribe possessed either or both of these items had a significant, if temporary, advantage over its neighbors.

Remington, Frederic. “Horses of the Plains,” in The Century: a popular quarterly, Volume 37, Issue 3, January 1889.