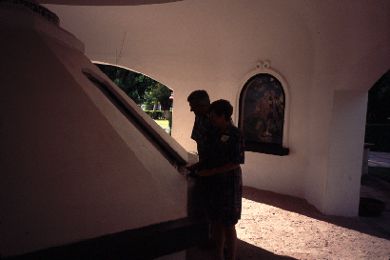 By the time Father Kino reached New Spain, Jesuit and Franciscan priests had established at least the outward form of Christianity from Durango to Chihuahua and from Culiacan to the present-day Arizona border. The passage into the northeast was blocked by the warlike Apaches, who were then coming into the Southwest from the Great Plains, but the natives to the west and northwest were friendlier to priests and missionaries from the south.

Young Eusebius
Father Eusebio Kino was the leading explorer of California and Pimeria Alta, but his story begins far to the east–in northern Italy. Eusebius Chinus was born in Segno, Italy, in August of 1645. His village priest must have realized how bright the boy was, for though his parents were not wealthy, young Eusebius was sent to the Jesuit College at Trent in the Tyrol (Austria). He continued his studies at Hala, near Innsbruck on the German frontier.

At the age of eighteen the young man was struck by a life-threatening illness and made a vow that if he lived he would enter the priesthood and become a missionary. His recovery was followed by the twelve years of rigorous study and service dictated by the rules of the Jesuit order. He studied in numerous universities in Germany and was particularly good at mathematics and astronomy, which would later serve him well in his exploring and map-making. He thought that his mathematical skills made him a good candidate for a mission to China, where mathematics was highly respected, but it was not to be. Above all, the young Jesuit must be obedient to his superiors, and his superiors destined him for New Spain.

Bound for New Spain
In 1678, fifteen years after the illness that caused him to take his vow, he was at last setting off for America, but getting there was not so simple. A group of eighteen priests assigned to travel together met in Genoa early in the year and sailed for Cadiz in Spain to board the Flota, the annual merchant fleet to the west. Bad weather delayed them several times, and when they arrived in Cadiz they saw the forty-four ships heading out of the port.

At the port of Cadiz Kino had his first experience of Spanish bureaucracy. He and his fellow priests waited four days to be allowed into the harbor and the city because of the various immigration and health regulations. It was only after the captain entertained the immigration officers at a splendid banquet that the ship was allowed to land her passengers. Now came literally years of waiting for another ship; the passengers did not want to board the slaveships that plied from Africa to America and the Order was not willing to pay the high fares demanded by smaller commercial vessels. Kino was not able to get passage until January of 1681, three years after he left Genoa. He arrived in Mexico that June.

It was at this point that the man known to history as Father Kino changed his name from Chino to Kino or Quino. Chino in Spanish meant Chinaman and was often slangily used to refer to any half-breed or low-caste individual and the term bore a distinct racial slur. The fledgling missionary’s first destination was Baja California, where he participated in the first exploration of the desert peninsula. After starting with high hopes, the party of missionaries soon realized that the rocky mountainous areas they found would never support agriculturally self-sustaining missions. The scant population they found survived on the fruit of the mesquite trees, cactus fruit and, near the shore, oysters. Soon the order came to depart the peninsula. Kino hated to leave the people he had befriended there, but had to accept the government’s decision when officials simply refused to send any more supplies to the settlement. He never forgot the people of Baja though, and throughout his life continued to petition for missions for them. They spurred the explorations that led him to the crossing of the Colorado River at Yuma and to the discovery of a land route to Alta California.

Pimeria Alta
When Kino arrived in Sonora, there were already many settlements in Pimeria Baja (lower Pimeria) devoted to mining and cattle-raising, as well as farming. Though there was a considerable Spanish population scattered over the area, the majority of the inhabitants were of native stock: Opatas, Yaquis, Mayos and Pimas. The Alta or higher Pimeria extended roughly from the San Ignacio River to the Gila and from the San Pedro River to the Gulf of California. North of the Pimas lived the Sobaipuris, bounded roughly by a line from Tubac to Fairbank; they lived on the San Pedro, Santa Cruz, and Gila Rivers north of that line. (After Kino departed most of these people were driven out or destroyed by the Apaches, or they merged into the Pima groups to the south and west.)

Pimas, Sobas, Sobaipuris and the Papagos, who lived west of the Santa Cruz, were all of Piman stock (O’otam) and spoke similar languages. Kino, who was fluent in the Pima language was able to identify these similarities. Living along the rivers, these natives used the scarce water for irrigation and successfully raised cotton, maize, beans, calabashes and melons.

Coming among these gentle and, for the most part, trusting people Kino felt great joy at the promise of winning their souls, and he seems to have had a charismatic effect on them that occasionally spurred envy on the part of less popular priests. When he first entered Pimeria Alta, he set up his headquarters at Cosari, which he named Nuestra Senora de los Dolores, Our Lady of Sorrows, in commemoration of an inspirational painting by Juan Correa, which the artist donated to the new mission church.

Explorations in Pima Land
Soon after he established Dolores, Kino became interested in exploring the lands to the north and the west. One of his first major exploratory discoveries was the Casa Grande Ruins near present-day Coolidge, Arizona. Having heard the Indians talking of the Great Red Houses built by people of long ago, he traveled from Dolores to Bac on the Santa Cruz River, then onward almost to the Gila, where he discovered the Great House in November of 1694. His is the first recorded visit to the famous ruin.

Two years later Kino made a circuit that took him into the Canelo Hills, then along the Babocomari Creek as far as the Pima villages along the San Pedro. The largest of these was Quiburi, the home of the Sobaipuri chief Coro, who became Kino’s firm ally and friend. The people along the San Pedro were often attacked by the Jocomes, Janos, and Apaches, and they had constructed an earthen enclosure to protect themselves. Kino contributed cattle and mares for their sustenance. He hoped that they would be a bulwark to protect the missions of Sonora from hostile Indians.

Kino and his party followed the San Pedro northwest, finding it uninhabited for about sixty miles north of Quiburi, but at Redington and the Aravaipa area he found more settlements in the marshy areas that provided enough moisture to grow crops of calabashes, melons and beans. Kino followed the Gila to revisit the Casas Grandes and then headed south to San Agustin (Tucson) and Bac. The familiar trail from Bac to Dolores was easily accomplished, and the circuit completed in about a month (Nov. 6, 1697-Dec. 2, 1697.)

California is not an island
Over the years that followed Kino traveled whenever he was able to get away from the day-to-day chores of the missions. He explored the Papago lands west of the Santa Cruz River and traveled as far as Yuma and the Colorado River. It was he who rectified the common error of considering California an island. He was able to prove that Baja California was in fact a peninsula and Alta California was reachable by land. Unhappily the land route which he labored so hard to discover was through such desolate and forbidding desert that it did not provide any easy solution to the problem of getting food to impoverished Baja. However, the discovery was important to the development of Alta California long after Kino’s death.

In addition to his work as an explorer and map-maker, Kino brought improvements in agriculture and building to the people he ministered to, as well as introducing cattle, horses and mules. He was a skilled rancher who provided the seed herds that formed the later core of ranching in Sonora, and he introduced wheat to the Pimas as well as to tribes as far away as Yuma. Father Kino died at the age of sixty-six in the mission he had founded at Santa Maria Magdalena de Buquivaba, now Magdalena de Kino, where his body rests to this day.

Secularization
Missions were founded with the idea that soon, at least within twenty years, the converts would be able to join the older Christians under the care of a secular priest in the parish church, at which point the missionaries would move on to new fields of converts. By the early years of the eighteenth century the Spaniards were pushing to expand the secularization of Sonora, taking the control away from the missionaries and putting it in the hands of secular priests, under the authority of the Bishop of Durango, and the Spanish government.

The Jesuits, who answered only to their own hierarchy for their actions, often came into conflict with the Spanish powers, both of church and of state. It did not help matters that many of the Jesuits were Italians, Swiss or Germans. Many of the Spaniards saw them as foreign intruders.

This conflict between the regular and the secular clergy had come to Kino’s door in 1707-08 when it was claimed that he, along with other Jesuits, had refused to administer the sacraments to Spaniards and denied them burial in the mission grounds. The Jesuit Provincial came to the defense of the Society and threatened to withdraw all their missionaries from Sonora if the damaging remarks were not withdrawn. Some compromise seems to have been reached and the missionaries remained in Sonora, but the problem would arise again in the future.

Spaniards who wanted to settle in Sonora complained that the missions had grabbed all the best land and that the missionaires had much more than they needed to supply the small villages of Indians in their care. The bishopric was supported by tithes, but tithes were not collected from the missions. Furthermore, miners and farmers complained that the missions monopolized Indian labor. The Jesuits, in turn, resisted everything that infringed on their authority with the Indians and exposed their converts to the “contamination” and exploitation by the civilian population.

Although Kino explored the area of the San Pedro River and was friends with Coro, the chief of the Sobaipuri, he never established a mission that far east. Between his death in 1711 and the expulsion of the Jesuits in 1767, the thin line of Spanish missions retreated west toward the Santa Cruz River. Until 1762 the Sobaipuris held the line at the San Pedro River against Apache hostility, but in that year they were persuaded by the priests to join the Pimas in the Santa Cruz valley. This left the San Pedro valley deserted and provided an open door for Apache raiders. The line of missions then resolved itself to Guevavi, Sonoita, Calabazas and Tumacacori, with the “heathen and isolated” San Xavier del Bac remaining the “farthest Christian pueblo.”

Although many missions were secularized when the king expelled the Jesuits from Spanish domains in 1767, the mission system was allowed to continue in these remote areas under the supervision of Franciscan friars. Fray Francisco Garces became the leading figure in Pimeria. The churches which remain today at San Xavier, Tumacacori and other places are in part or mainly Franciscan structures erected on foundations laid by Kino.